Have you noticed that one energy healing session or practitioner might feel more effective than another?  Why is this?  In this article, we’ll be suggesting why this might be, and offering 3 ways that could help us to maximise the effectiveness of our Energy Healing. Anyone who’s ever seen Dr. Brad Nelson, creator of The Body Code, demonstrate a session will know that at the start of working with every client, he takes a moment to go quiet and make a connection with a higher power.

The reason this is important is because it recognises that the work we’re about to do and the results we’re about to achieve are not actually our achievements.  After all, it’s not as if any of us understands exactly how energy healing works (I’m still amazed by the results it has) or that we’d know what to do if it suddenly stopped working for us and didn’t come back.

It would be much better to think of ourselves as a channel for the work – sharing in the wonder of it with our clients and joining them in the celebration of the results it is achieving.  That way, we don’t feel the anxiety that comes with the weight of responsibility for the results and we don’t feel any need to prove ourselves to our clients or to pretend to be some sort of expert.  If we can achieve this level of humility, and invoke a higher source of help for the work we’re doing, then we open a channel and the work flows through us, rather than be directed in every detail by us.  We will achieve much less if we’re limited by our own understanding and more if we’re surrendered to the work as it needs to happen!

So, how do we best make that connection.  Each person will find their own way.  Personally, I have been a Heartfulness meditation practitioner for more than 20 years, and through Heartfulness, I’ve learnt to make a very direct and experiential connection with the divine, which is with me most of the time now, and which I’m extremely grateful for.  This is exceptionally valuable in all aspects of life, including making the connection at the start of a healing session, and maintaining in throughout.  Heartfulness is highly recommended, and is always completely free. Having established a connection, we then need to direct its power with our clear and focused intention.

This intention needs to be focused on the result of the work, and maintained throughout the time we’re working.  I get my clients to join me in this, as their focus and intention also has a big influence on the work.

As an example from my own experience, I noticed at one point that while the work I was doing was having wonderful results for my clients, the same was not true when I worked on myself.  I realised that this was because when I was working on myself, I wasn’t taking the time to make and then to hold a strong intention.  Sometimes, I was even walking down the street half focused on other things.

When I rectified this and started taking the same care when working on myself and when I worked on others, I noticed a big improvement in the results. So, what would be the best focus for our intention?

But there’s a problem with this.  If we do this, we’re putting our attention on the very thing we want to be rid of.  In line with the old saying, “Where attention goes, energy flows”, we give power to what we think of.  If we’re thinking of knee pain – even if we want to be rid of it – that’s what we’re giving power too.

So, it would be much more effective to focus on what we’d like the outcome to be.  For the depressed person, they might dream of walking into a room and feeling connection and love from all of the people in it.  The person with knee pain might dream of running a marathon or jog through the countryside, feeling the wind through his hair and hearing it in his ears as he runs.

It’s these experiences (and not just the concepts of them) that we need to put our focus on, as this is what directs the work.

The great Greg Braden told a story about when he went to a desert in the American mid-west during a drought to meet a tribe leader who was – so he thought – about to pray for rain.  But when they met, the leader told Greg Braden that he wasn’t going to pray for rain, because in doing so, he’d effectively be acknowledging and drawing attention to the fact that they didn’t have rain.  He wouldn’t be able to hide his anxiety over the lack of rain they were experiencing.

So instead, he closed his eyes and conjured up the experience of being in the rain – feeling it on his skin, hearing it, feeling his feet and ankles drenched in the mud as he walked through it, smelling the scent of the plants interacting with the moist humidity as the rain fell.  He put himself as deeply as possible into that experience as if he was already living it and, importantly, gave thanks for what he was experiencing.

The experience was the prayer, and the gratitude that gave it its power.

That night, a band of rain from many miles away broke off from its trajectory, took an unlikely route to precisely the place where the prayer had happened, rained heavily and then resumed its course.  This improbable development had the TV weather forecasters stunned when they reviewed it the next day.

This is the power of prayer in the truest sense, and it’s a power that we can apply – along with our clients – to our energy healing. 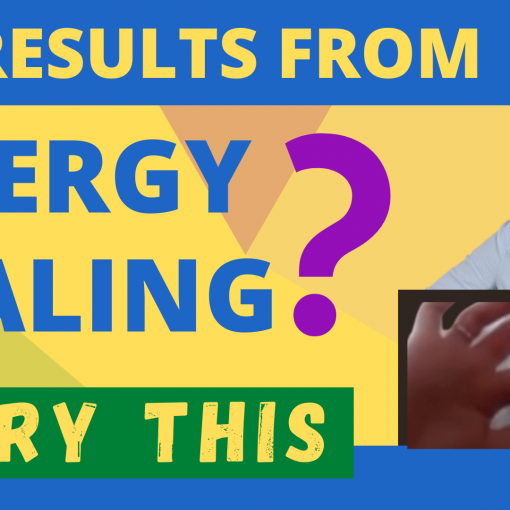 1. Maybe It Is Working Energy work can sometimes take time to show results.  I’ve had many experiences working with clients where […]